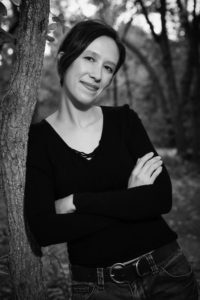 Terah Harrison is a Licensed Professional Counselor and hosts the podcast Make More Love Not War which has a clear mission of helping people have more sex and less fighting.  She discovered the need for her podcast as she saw male clients at her private practice in Fort Worth Texas, who were struggling to understand their female partners.  Most of these men were striving to be better partners but their strategies to achieve this only made things worse.  Many times a simple change would improve their relationships dramatically.

With this amazing information that would benefit men and the women they love in hand Terah wanted to reach more men but how without bending space time?  In her personal life she wanted her husband, Jeff, to go to couples therapy but alas, he would not. If a therapist’s husband won’t go to therapy how many other men are missing out on the knowledge that would get them more sex?  She noticed Jeff listening to podcasts every day and talking about what he learned from them.   The solution hit her like a bolt of lightning – create a podcast that will bring therapy to the men who for whatever reason don’t go.

Since Terah started the podcast she has been able to interview some amazing experts in love and relationships- authors, professors, therapists, and coaches.  She has also created a series that gives men a back stage pass into a woman’s mind called Whine With Wine and another series that highlights power couples as well as couples in conflict.

Terah’s podcast may be directed towards men but her Evil Plan is really to help women have more connected relationships with men where they feel heard and understood in a way that leads to MORE SEX and LESS FIGHTING for all!!!

One word of caution before you listen. This episode is very real, raw and honest about abuse Terah suffered, both physical and emotional. If that is more than you are ready to handle right now, or you have a sensitive audience, please make the best choice for you.

Key Points from the Episode with Terah Harrison: