This is my first time having two guests on at once, and the hardest part may be the show notes page! Today, I’m bringing you Gareth Martin and Craig Haywood, the hosts of the amazing podcast, Ridiculously Human. They are committed to the art of storytelling by having guests come to tell their stories, and the two of them have a great chemistry and ability to draw out the best of those stories for the listeners (and for the person telling the story and for the two of them).

Both from South Africa, they share a passion to unwrap and explore the lives of interesting people. As humans,  we are all connected on a much deeper level and through storytelling and storylistening, and Gareth and Craig aim to realize and understand those connections better.

Their podcast and website are dedicated to sharing the stories and journey’s of other incredible humans. They want everyone to realize that we all have responsibility and a role to play as micro-leaders and micro-influencers, and that together we are stronger and better.

Here is some more detail on each of them separately. 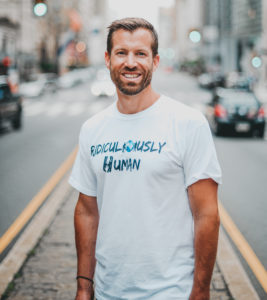 Gareth Martin, knows all too well about trying many things in life. He believes that there is a certain importance around experiencing new things, to help grow you as a person and find out who you are and what you want in life.

Gareth was born and grew up in Johannesburg, South Africa. He was never one to shy away from getting involved in team-sports and thrived in the competition and camaraderie, but he also found a lot of peace and solitude in individual sports, namely swimming.

His folks got divorced when he was nine years old, and like with many break-ups, it was pretty messy. It ended up creating a lot of confusion and sadness in his life when he was a teenager. He couldn’t quite understand the anger he saw between his parents, because Gareth was always a bit of a soft, compassionate kid at heart.

When he was sixteen, his life would take a shocking turn when he was involved in a life-threatening head-on collision while riding his motorbike. Gareth looks back on this event with good fortune because he believes that it gave him a different perspective on life which he would not have otherwise had. He knows it’s important to make the most of every opportunity because you do never know when your time might be up.

After deciding to overstay his first gap year in London, it was time to get serious and find a real job. So he went to a job fair and managed to get himself a role doing the filing at an Investment Bank. Little did he know, that it would be a career which would span almost 20 years.

These days, Gareth works as a Transformational Coach, he is also the co-host of The Ridiculously Human Podcast. It took him a couple of years of transformation and upskilling to get him here though. After banking, he spent 3 months in India learning to become a Yoga and Meditation Teacher. He then spent a year studying to be a chef. He also completed a few other life-changing courses, one of which included getting certified as an Executive Coach.

Gareth believes in not letting anyone else’s thoughts stop you from doing what you want in life. Embrace each opportunity which comes it’s way and make the most of every interaction you have. Make the most of your relationships and friendships and treat every moment as a learning opportunity. 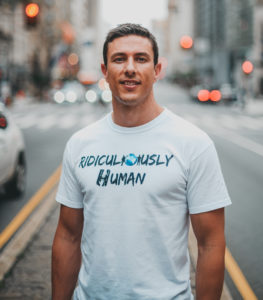 Craig was born in Port Elizabeth, South Africa, known as the friendly and windy city! He struggled a bit as a youngster with self-esteem issues. At times, he sometimes felt disconnected with his parents, he blamed himself for their fighting and would use food as a coping mechanism, and he ate a lot!!

His Grandad, played a big influence in his life and ‘their thing’ was to go fishing together. Besides being a great storyteller, his Grandad would also teach all the grandkids how to drive from a very young age, as well as, how to do the Waltz!

When Craig was 17 years old, something would happen that would take him on a new life trajectory. Their little family sausage dog, Jackie, was in extreme pain and had lost the use of her back legs. The vet could not help Jackie, so he sent them to see a Chiropractor. The Chiropractor, adjusted her spine and the lame legs she went in on, she managed to walk out on….!! A year later, he was living in his sister’s garage in Johannesburg, to begin his studies to become a Chiropractor.

Craig suffered a severe setback when he was diagnosed with ankylosing spondylitis, an autoimmune condition. It started with inflammation in his eye, and his pupils would not dilate. He then experienced inflammation in his knees and hips, which really impacted his mobility, and being a Chiropractor, that was a rather scary prospect. Through hours of learning and searching and implementing changes in his diet and mindset, he has never been healthier and has no signs of ever having anything.

Once qualified, a rather serendipitous scenario led him to accept a job in the Netherlands. It was a bit of a shock moving to somewhere he had never been, had no friends, didn’t understand the culture and never spoke the language either!! Talk about throwing yourself in the deep end.

Craig is a master of many things, two which stand out are, excelling in his profession as a Chiropractor and his likeability factor. He makes a huge effort to network and make others feel comfortable.

He likes adventure and to take calculated risks, and now resides with his wife, Chantelle, in Australia. He gets to see his brother often, lives near the beach, enjoys the great weather, has a thriving practise and Chantelle has a highly successful business too!

Key Points from the Episode with Gareth Martin & Craig Haywood of The Ridiculously Human Podcast: