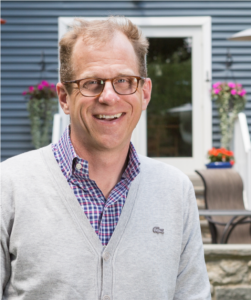 Michael O’Brien is the Chief Shift Officer at Peloton Coaching and Consulting. He elevates successful corporate leaders by preventing bad moments from turning into bad days. His award-winning, best-selling memoir Shift: Creating Better Tomorrows chronicles his Last Bad Day and near-death cycling accident recovery journey. He has shared his inspirational story and transformation from human DOer to human BEing and work and at home on the TEDx stage, with multiple Fortune 500 companies, ABC, Real Simple Fast Company, and many wonderful podcasts like Do a Day.

Michael was a successful sales professional and Marketing Director. The same stress that you and your team feel every day burdened him. There were many days when he just wanted to survive. He knew he could be better, but didn’t know how to consistently find the energy to thrive and get closer to being his best.

The sad thing is that he didn’t need to be chasing back then. He already had many wonderful reasons to be happy. He was a proud, new dad of two wonderful daughters, had a loving wife who was and still is his best friend, he was healthy, and he had a career filled with promise. But he rationalized his chase and, in hindsight, made up ego-based reasons why he had to keep living that way.

Many times, he caught happiness, but like a dog chasing its tail, he didn’t know what to do when he caught it. He was happy for a moment. It validated his pursuit, but then it floated away. So, he got back to stressfully chasing. He was exhausted but couldn’t tell anyone because he was the leader at work and the provider to his family.

He knew there was a better way, but he couldn’t see it.

Then, on Monday, July 11, 2001, while at a corporate meeting in New Mexico, Michael went out for an early morning bike ride that changed his life permanently. An SUV crossed the center line in the road and hit him head-on, going close to 40 miles per hour (plus Michael’s speed). As he laid waiting for the medical trauma helicopter, he told himself that life would be different if he lived.

His recovery was the catalyst to the seminal shift that changed his perspective, mindset, and actions. It put him on a path to create better tomorrows at work and in life, and sparked his executive career progression, which was instrumental to finding happiness and passion for business leadership development and creating his business, Peloton Coaching and Consulting. It also lead to his amazing book, My Last Bad Day Shift: How to Prevent Bad Moments from Turning into Bad Days.

Michael shares the story of his accident, and the shift that came as a result. His experience is the inspiration for many to shift their situation, so listen to this episode and find how you, too, can shift your life from whatever Last Bad Day you may have.

Key Points from the Episode with Michael O’Brien: