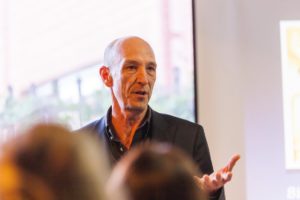 Gary has always had a passion for innovation and creativity. His career has spanned the retail, music and radio industries. Gary’s drive comes from having people and organisations think differently to generate new ways of doing things.

As a thought leader in innovation and creativity, Gary has helped companies of all sizes, in all industries and categories, to look at how they currently do things and address what needs to change in order for them to think differently and maximise the ideas that currently exist within the business, with the view to making the company more successful. He is often called when companies or individuals lose their mojo.

Through easy to understand, fun, interactive speeches and sessions, he presents to a wide variety of clients in the areas of creative thinking, mojo, marketing, strategic facilitation, and innovation to improve performance and help us be at our best.
​
Gary has written 6 books, a number of which have become best sellers, and won the Speaker of The Year Award for TEC (The Executive Connection) in both 2007, 2008 and again in 2012.

In addition to his speaking commitments he also established Australia’s first ever creative thinking venue The Ideas Vault at The Entertainment Quarter in Sydney, co-founded Australia’s leading cycling foundation the Tour de Cure in 2007, writes a blog called The Espresso, in which he scours the world to find interesting tips, tools and news to give you a new or different perspective on the world in which we live, and hosts a popular new podcast series on iTunes called The Mojo Radio Show.

Key Points from the Episode with Gary Bertwistle: