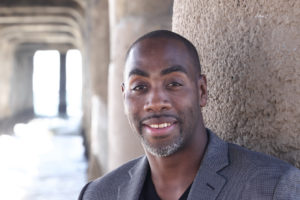 Who is Cornell Thomas? That’s a question that even he wasn’t quite sure about until 2011. He is a former athlete, a speaker, an author, a thinker, an activist, but more importantly than any of those titles, he is a husband and father.

Cornell Thomas is the youngest son of Bobby and Tina Thomas. That sentence is very important in regards to who he is, as you will hear in the show. If not for his parents, he wouldn’t be the man you see today. His father passed away when he was just three years old, and although his time with his dad was brief, he learned through others the amazing legacy that his father left behind, as a police officer and community leader.

His father’s passing forced his mom to become he and his siblings’ everything. She was their main provider, mother, and life educator. She was forced to become an expert problem solver, and that skill was passed down to her children. Cornell’s mom raised her children on the old adage, “Everything happens for a reason,” and that one lesson out of the myriads she has taught him was never forgotten. It’s what he remembered when he suffered a career-ending basketball injury, and the first thing he thinks about when any adversity comes along.

In that dark times, his mom’s teachings served as his light. It was that ‘bounce-back-ability’ ingrained in him since his youth that has allowed him to find his purpose through the pain.

What Brought Cornell to The Do a Day Podcast?

That’s the question most people spend their whole lives trying to answer. He thought his purpose in life was to play professional basketball. In 2003, he received a contract to play professional basketball in Portugal. A dream he had since discovering the sport at 16. Two weeks before he was supposed to leave, he suffered a career-ending injury that reshaped his life, as he gets into in this episode. He was sickened by all of the negativity he was seeing online, and decided to start writing his own motivational quotes for his personal Facebook page. The quotes eventually led him to writing a blog, and the blog led to his first book The Power Of Positivity-Controlling Where The Ball Bounces.

In 2011, he realized what his true purpose is – to inspire and motivate others. He’s been fortunate enough to speak all over the world sharing his story with people from all walks of life. Daring others to say, “What Now?” instead of, “Why Me?” in the face of adversity.

Key Points from the Episode with Cornell Thomas: