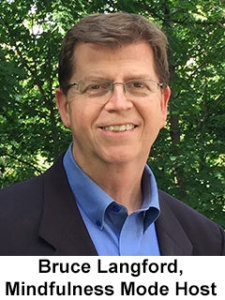 Bruce Langford is a Mindfulness consultant who is hired by companies to improve employee work-life balance by replacing stress and anxiety with team spirit and self-respect. Happy, committed team players result in a climate where ROI is increased, sick days decline and general wellness improves. Bruce’s extensive background in bullying prevention equips him, through mindfulness, to inspire employees to replace self-bullying and judgmental behaviors, with a strong desire for cooperation and respect.

When people want to become focused winners at what they do, whether in their business or in their personal life, they seek out proven winning partners who will give them focus. That’s what Bruce does in his coaching practice and with his top-ranked podcast, Mindfulness Mode. Bruce shows you how to get grounded and centered so you can do what you do best, moving forward with confidence. He helps you make the impact you desire and enjoy the freedom you deserve in your life.

He knows from his own personal experience with exactly this. How he grew up defined his sense of self, which included being stifled and type-cast. It literally caused him to not be able to find his voice. Through mindfulness and confidence work, he was able to do just that, and turned outward with his message to help others do the same.

Bruce is a great person, cares deeply about others, and shares his story and his values in this episode.

Key Points from the Episode with Bruce Langford: